Benefits of Nanotechnology on Health and the Environment

Nanotechnology is concerned with manipulating matter to near atomic scales between one and 100nm (nanometers-1 billionth of a meter). This technology has recently gained popularity due to its potential in altering the behaviour of individual molecules and has opened the door to new applications. Many researchers have pinpointed the potential risk of nanotechnology on the environment and on human health. This is due to the fact that the extremely small nanoparticles can penetrate into human cells. This paper aims at determining ways in which this new technology can benefit the environment and the state of people’s health. Typical expectations of functional paints and coatings include: durability, reproducibility, easy application and cost effectiveness, tailored surface morphology and environmental friendliness. Through the use of nanotechnology, these properties can be achieved; therefore inflicting less environmental damage and cost.

Don't use plagiarized sources. Get Your Custom Essay on
Benefits of Nanotechnology on Health and the Environment
Just from $13/Page
Order Essay

As shown in figure 1 (refer to appendix), the list of benefits for paints containing nanoparticles is extensive. It is also apparent that nano titanium dioxide (TiO2) is one of the most common nanoparticles in both the paint and lacquer industries. The primary reason for this is its ability to make the paint more durable (refer to figure 2 for following references). The wavelength of the visible light spectrum ranges between 400 and 700nm, whereas TiO2 is much shorter (200-350nm). This property renders the coating transparent and more aesthetically pleasing whilst also allowing UV absorption smaller wavelength means more energy. Therefore, when moving from left to right in figure 2, the different types of radiation become increasingly destructive. During UV radiation, UV photons can cause ionization, where electrons break away from atoms and this vacancy affects chemical properties. As a result, the paint could begin to flake, otherwise known as ‘chalking’ where it is then washed away into the environment (1)(2)(3). Nano TiO2 coating serves to prevent this and is therefore considered to be an advantage to the environment. As durability is increased, the longevity of the paint does likewise and therefore, the rate of production is lowered. This means that energy and resource outputs are decreased, thus benefiting the environment once more. 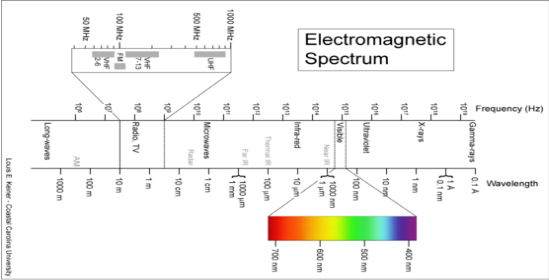 One of the most advantageous characteristics of nanoparticle paints and coatings is their self-cleansing property. Nano scale titanium dioxide (TiO2) is the most often employed nanoparticle that exhibits this property. As TiO2 is photo catalytic, when illuminated with an ultraviolet (UV) source (e.g. sunlight) in the presence of water, valence electrons are transferred into the conduction band of TiO2 and then react with oxygen. Super oxide radicals result. These photo-produced radicals are powerful oxidizing species and can cause the deterioration of organic contaminants or microbial pieces on the particle surface. Furthermore, nano TiO2 is super-hydrophilic, i.e. the entire surface attracts and spreads water out into a thin film (4). Therefore, water and rainfall easily wash away contaminants when the coating is applied on an exterior surface. 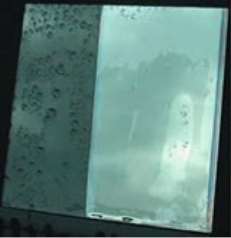 Figure 3: Hydrophilic coating (right) with TiO2on float glass for comparative purposes. Notice how right side is spread out thinly to cover as much surface as possible. This allows for a more consistent cleaning (4).

Self-cleaning surfaces can decrease the amount of cleaning required. In the case of industrial cleaning in particular it can reduce labour costs and extend a material’s durability. Lower energy costs and less use of cleaning detergents are expected to be the primary environmental benefits (5). In fact, nano TiO2 was proven to achieve the following:

In summary, the photo catalytic and hydrophilic features of nano T (Environmental Protection Agency , 2015)iO2 result in the benefit of self-cleaning. When compared to that of standard paints, this is also beneficial to the environment whilst also being more cost effective. In addition, paints coated in nano TiO2 have also managed to reduce surface pollution.

Paint which photocleans the air of automobile-produced nitrogen oxides (NOx) is currently under heavy promotion. NOx are formed during the combustion process when nitrogen (N) and oxygen (O) are present at elevated temperatures. They also serve as key precursors for ozone and this can lead to numerous health effects as outlined in the figure below. 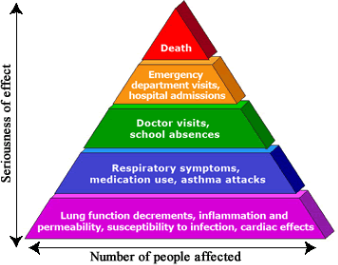 Figure 4: The relationship between the severity of the effect and the proportion of the population experiencing the effect can be presented as a pyramid. Many individuals experience the least serious, most common effects shown at the bottom. Fewer individuals experience the more severe effects such as hospitalization or death; however, they are still possibilities especially after prior health issues or prolonged exposure (6).

In the presence of sunlight, TiO2 nanoparticles in the paint, form hydroxyl and peroxyl radicals, which then react with NOx in the air to produce nitric acid. This reacts further with calcium carbonate in the paint matrix to generate minute quantities of calcium nitrate, water, and carbon dioxide (CO2). Calcium nitrate is especially useful as a fertilizer; therefore it is not harmful to the environment. And although CO2 is considered a greenhouse gas, it is nontoxic (7)(8). 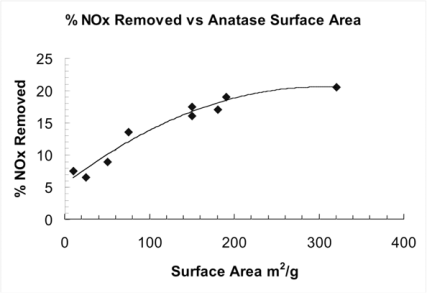 Figure 5: graph compares the surface area covered by anatase (one of the three forms of TiO2) to the % of NOx removed from that vicinity. Eventually it will plateau as the production of NOx will be no longer be able to reduce by more than is being created (7)

In an experiment, a 4,100m2 wall was subjected to paint containing TiO2 nanoparticles. Results showed that each square meter could remove 80g of NOx from the atmosphere per year. Furthermore, NOx levels in the vicinity of the wall were compared to that of other areas of the city and a 57% decrease was found. It can be concluded from this information that health effects would also be lowered proportionally (8). As the effects of nano TiO2 particles in paint are evidently advantageous, it supports the statement that in general, the positives of nanoparticles outweigh the negatives.

If nanoparticles are firmly imbedded within a coating matrix, current risk assessments conclude that the probability of a harmful impact on the environment is very low. However, nanoparticles may be released as a result of weathering on the coating matrix. An investigation conducted in 2010, has shown that very small amounts of TiO2 (between 20 and 300nm in size) are released by house paints due to weathering. They can then enter the soil via rainwater drains. As stated previously, the photocatalytic activities of TiO2 are able to produce oxygen radicals. They are in fact toxic for aquatic organisms. However, the release of nanoparticles into the environment can be reduced or prevented if nanomaterials and coatings are designed accordingly. Regardless of the fact that surface coatings which contain firmly embedded nanoparticles currently pose a minute risk to the health of users and consumers, special attention is required for those that manufacture nanoparticulate raw materials. (4)(9) (Chang)Nevertheless, there are currently no known long-term health effects as a result of nanoparticle paint, and the short-term effects are easily reduced or prevented when safety measures are taken accordingly. Although possible health and environmental effects may exist, they are unsupported and easily outweighed by the positives of nanoparticle paints.

Several advantages for nanoparticles used in paint and lacquer have been focused on throughout this paper. Although many more are possible as outlined in figure 1 (appendix), it is evident from the properties of UV absorption, self-cleansing and NOx reduction alone, that it overcomes the unfounded negative impacts. In fact, the only undesirable aspect is the danger that nanoparticles could inflict upon the appliers and manufacturers. However, there is very little supporting evidence and can therefore not be used as a counter argument for the use of nanoparticle paints. It is important that the public understands how beneficial this technology is they would be doing themselves and the environment a great disservice. 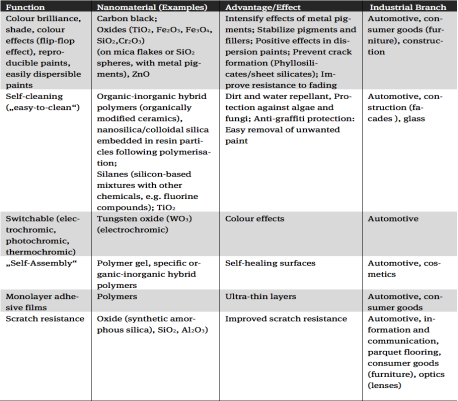 Figure 1: above table states the various advantages of nanoparticle paints and coatings along with their respective nanomaterial and industrial branch (1)

Continue to order Get a quote

Calculate the price of your order

The price is based on these factors:
Academic level
Number of pages
Urgency
Basic features
On-demand options
Paper format

Delivering a high-quality product at a reasonable price is not enough anymore.
That’s why we have developed 5 beneficial guarantees that will make your experience with our service enjoyable, easy, and safe.

You have to be 100% sure of the quality of your product to give a money-back guarantee. This describes us perfectly. Make sure that this guarantee is totally transparent.

Each paper is composed from scratch, according to your instructions. It is then checked by our plagiarism-detection software. There is no gap where plagiarism could squeeze in.

Thanks to our free revisions, there is no way for you to be unsatisfied. We will work on your paper until you are completely happy with the result.

Your email is safe, as we store it according to international data protection rules. Your bank details are secure, as we use only reliable payment systems.

By sending us your money, you buy the service we provide. Check out our terms and conditions if you prefer business talks to be laid out in official language.